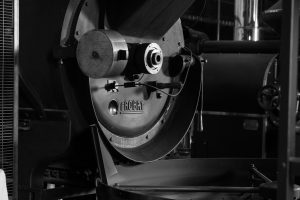 When David Faulkner started Extract Coffee Roasters, he and his co-founder had a clear vision of what they wanted the business to be.

They wanted to roast good, sustainable coffee without all the pretentiousness that’s attached to some of the more modern coffee brands.

He said: “I’m not actually a big coffee drinker, but I love produce and I love getting things right and that’s what I think we’ve done here.

“We make sure we talk in plain language and try to cut out all the bull that can make the speciality feel so arty farty. We just try to do really good low price coffee that’s open to everyone.”

Extract imports green coffee beans from across the world. David and his team then roast the coffee inside the company’s lovingly restored range of vintage roasters.

The company also tries to be active at other points along the supply chain. They try to source the green coffee from sustainable farms and also offer equipment and training to coffee shops to help them produce the best cup of coffee possible.

Before he became head roaster at Extract, David was a classically trained chef and he is a firm believer in quality over quantity.

“A lot of people just spend their money on garbage. Buying better quality stuff shows you are more conscientious and it shows you care about yourself. Plus, it makes you happier,” David said. 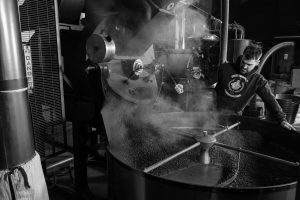 And it’s not all talk with David either. He won the 2011 UK Coffee Cup Tasting Championship, where coffee drinkers have to spot the odd one out from three cups of coffee. He even went on to represent the UK at the World Cup Tasters Championship for speciality coffees.

It is this attention to detail that has helped Extract Coffee Roasters grow from a garden shed hobby shop to a large scale roasting operation employing 26 people.

This thoroughness is also applied on the factory floor, where David likes to keep it black.

“A lot of stuff is painted black in the factory; the machinery is all black. I just think it makes stuff look smart,” he said.

And when David needed a new container for weighing out coffee beans, he came to BuyBuckets.co.uk and bought a few jet black containers.

We are just pleased to be a small part of Extract Coffee Roaster’s recent success, and we wish them all the best for the future. 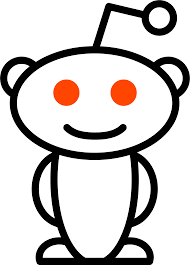 And we think he makes a pretty good argument.

One Reddit user was so pleased with his bucket purchase that he took to the social network site, and crafted an elegant argument for why everybody should keep one close at hand.

In a discussion about what unexpected domestic items ended up being the most useful, Reddit user Shuggins made his case.

And it ended up being one of the most viewed pages on the site last month.

Shuggins is obviously a big believer in the functionality of buckets. And his rundown of all the possible bucket uses is quite exhaustive.

We particularly like some of the situations he talks about that don’t come around that often, but for which you should always keep equipment around.

He also talked about some of the more unsanitary uses of buckets, which we won’t repeat, but which are equally valid.

Other Reddit users clearly agreed with Shuggins. The single comment received more than 6,000 points and generated hundreds of replies.

Other users jumped in with their own advice on bucket buying.

We don't know about Home Depot buckets, but you can buy heavy duty buckets from us for cheap as well. And they even come in orange.

Some people even pledged to buy more than one bucket.

And some people had a bit of a laugh.