Jerry cans (or jerrycans) are a great way to transport fuels and other liquids safely. But where did the term jerry can come from? And how did the inventors arrive at their unique design? 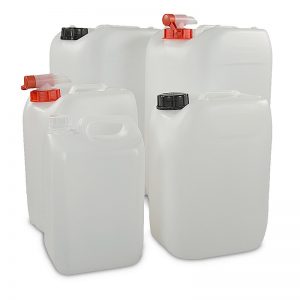 The first cans were produced in Germany in the 1930s. They were originally known as Wehrmacht-Einheitskanisters (roughly translated as Wehrmacht unit canisters). The fuel containers in use up until this point in time required tools and funnels to use and there was a need for a simpler, more functional container. This new design was produced in 1937 by an engineering firm called Müller. There was a requirement that soldiers should be able to carry either two full containers or four empty ones. For this reason, the original jerry cans had triple handles.

A couple of years later, in 1939, an American named Paul Pleiss built a car to make a journey to India with a colleague who was a German engineer. After building his car he realised that they didn't have any place to store emergency water. Faced with a journey of this magnitude, it was clear that reserve water would be essential. His colleague, the German engineer, was able to procure some spare jerry cans from Berlin Tempelhof Airport. He also provided Pleiss with the complete manufacturing specifications for the jerry can.

When Pleiss returned to Philadelphia, he told the American military about the can but received no interest whatsoever. It was later sent to Camp Holabird, Maryland where it was given a significant redesign. Whilst the new design retained the basic size and shape and also the handles, it could now be stacked interchangeably with German and British fuel cans.

The new US jerry cans were used by the US Army and US Marines all over the world. A huge 19 million were required to support the American Army by the end of World War II.

Originally, all jerry cans were made of pressed steel. Today, they are available in a range of materials (for example, our plastic jerry cans) and aren't just for lugging fuel about!

Our plastic jerry cans are manufactured from food grade plastic and are ideal for storing all manner of liquids, sauces, juices, etc.